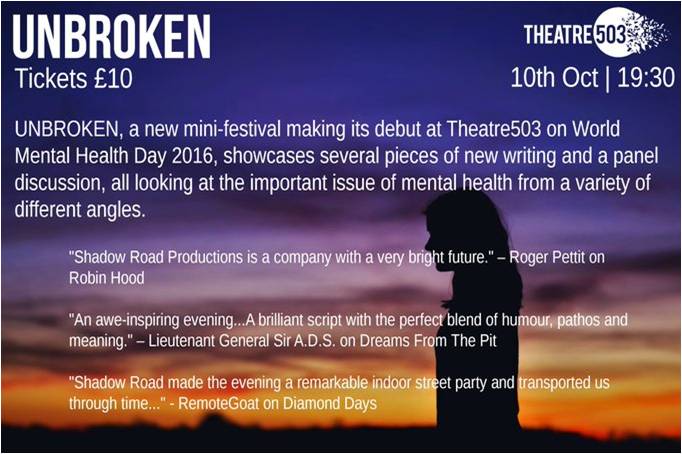 Anthony Bunsee – In the course of his enviably long and varied career, Anthony, an experienced actor, has so far appeared in everything from The Kite Runner (Nottingham Playhouse & UK tour) to The Histories (RSC). His television credits include Hieroglyph, Borgias III, EastEnders, My Family & Hollyoaks. Films include The Informant, Sex and The City 2, Dorian Gray & One Crazy Thing.

Camilla Walters – Co-Producer of UNBROKEN and a working actor, Camilla has experience with the issues covered in the show.

Special thanks to Jessica Campbell, Andrew Shepherd, Lisa Spirling, Audrey Thayer, Bridget Rudder and the rest of the team at Theatre503, to David & Kay King-Farlow, Rachel Stephenson, Anthony Bunsee, Lyn & Tori Gretton, Chiswick Theatre Arts and all our generous supporters, without whom none of our work would be possible.

A mental health awareness festival with the aim of increasing awareness of the issues, reducing the stigma surrounding them by opening up the conversation, and confounding expectations as to what a production about ‘mental health’ might involve!

– Support us by donating via our Go Fund Me page

We are currently open for submissions for our 2021 Short Film Prize. Deadline is 31st August 2021.

To submit and for more information please visit: www.filmfreeway.com/Unbroken2021

To find out more about our past shortlisted films please visit here.